Based on the "IDEs" category.
Alternatively, view Spyder alternatives based on common mentions on social networks and blogs.

Do you think we are missing an alternative of Spyder or a related project?

Some source files and icons may be under other authorship/licenses; see NOTICE.txt. 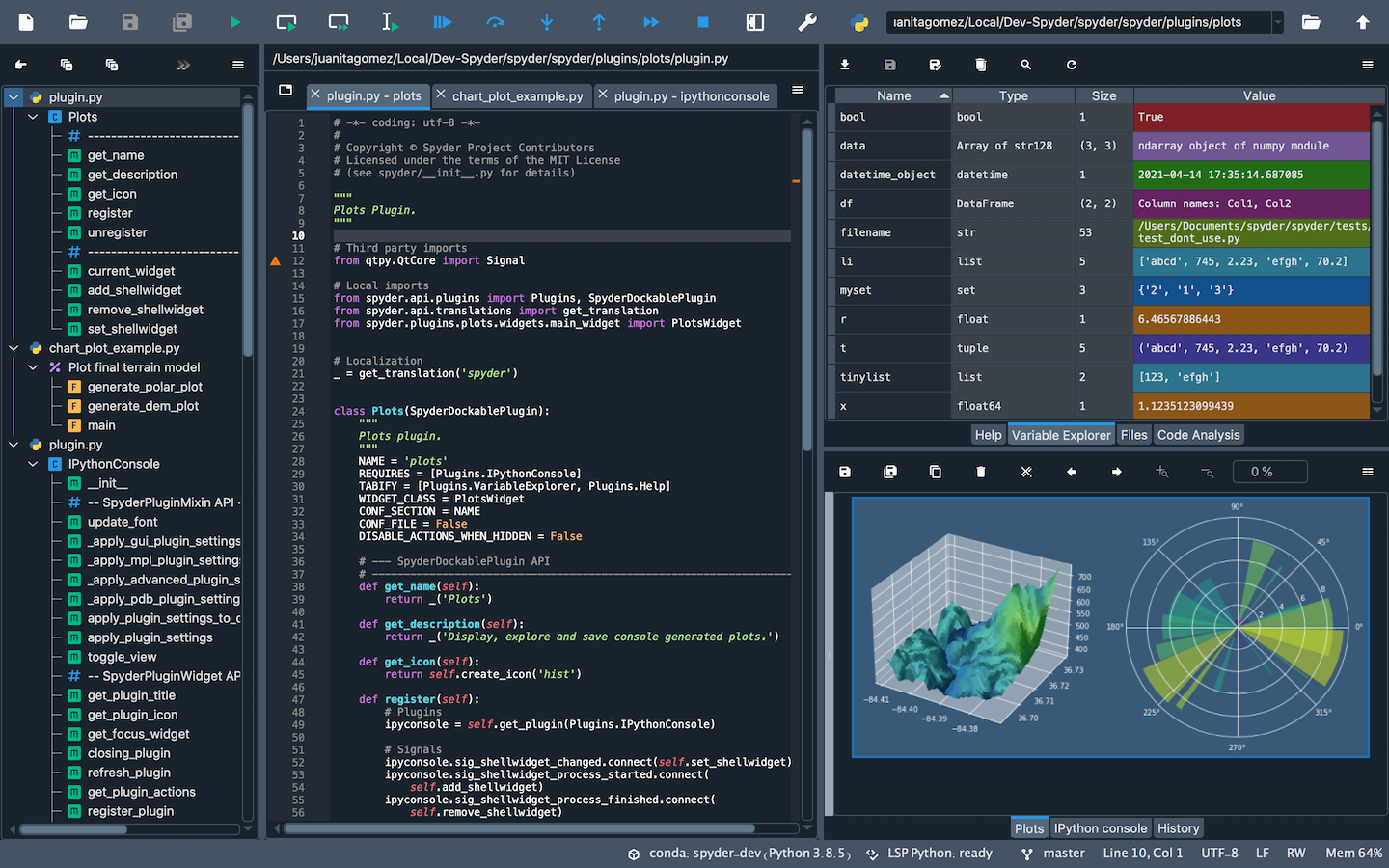 Spyder development is made possible by contributions from our global user community, along with organizations like NumFOCUS and Quansight. There are numerous ways you can help, many of which don't require any programming. If you'd like to make a donation to help fund further improvements, we're on OpenCollective.

Thanks for all you do to make the Spyder project thrive! More details

Spyder is a powerful scientific environment written in Python, for Python, and designed by and for scientists, engineers and data analysts. It offers a unique combination of the advanced editing, analysis, debugging, and profiling functionality of a comprehensive development tool with the data exploration, interactive execution, deep inspection, and beautiful visualization capabilities of a scientific package.

Beyond its many built-in features, its abilities can be extended even further via its plugin system and API. Furthermore, Spyder can also be used as a PyQt5 extension library, allowing you to build upon its functionality and embed its components, such as the interactive console, in your own software.

For more general information about Spyder and to stay up to date on the latest Spyder news and information, please check out our new website.

You can read the Spyder documentation online on the Spyder Docs website.

For a detailed guide to installing Spyder, please refer to our installation instructions.

The easiest way to install Spyder on any of our supported platforms is to download it as part of the Anaconda distribution, and use the conda package and environment manager to keep it and your other packages installed and up to date.

If in doubt, you should always install Spyder via this method to avoid unexpected issues we are unable to help you with; it generally has the least likelihood of potential pitfalls for non-experts, and we may be able to provide limited assistance if you do run into trouble.

Other installation options exist, including:

However, we lack the resources to provide individual support for users who install via these methods, and they may be out of date or contain bugs outside our control, so we recommend the Anaconda version instead if you run into issues.

Before posting a report, please carefully read our Troubleshooting Guide and search the issue tracker for your error message and problem description, as the great majority of bugs are either duplicates, or can be fixed on the user side with a few easy steps. Thanks!

Spyder was originally created by Pierre Raybaut, and is currently maintained by Carlos Córdoba and an international community of volunteers.

You can join us—everyone is welcome to help with Spyder! Please read our contributing instructions to get started!

Running from a git clone

Please see the instructions in our Contributing guide to learn how to do run Spyder after cloning its repo from Github.

Important Note: Most or all of the dependencies listed below come with Anaconda and other scientific Python distributions, so you don't need to install them separately in those cases.

When installing Spyder from its source package, the only requirement is to have a Python version equal or greater than 3.7.

The basic dependencies to run Spyder are:

The rest our dependencies (both required and optional) are declared in this file.

Spyder is funded thanks to the generous support of

and the donations we have received from our users around the world through Open Collective:


*Note that all licence references and agreements mentioned in the Spyder README section above are relevant to that project's source code only.