Based on the "Data Visualization" category.
Alternatively, view Altair alternatives based on common mentions on social networks and blogs.

Do you think we are missing an alternative of Altair or a related project?

The Vega-Altair open source project is not affiliated with Altair Engineering, Inc.

Vega-Altair is a declarative statistical visualization library for Python. With Vega-Altair, you can spend more time understanding your data and its meaning. Vega-Altair's API is simple, friendly and consistent and built on top of the powerful Vega-Lite JSON specification. This elegant simplicity produces beautiful and effective visualizations with a minimal amount of code. Vega-Altair was originally developed by Jake Vanderplas and Brian Granger in close collaboration with the UW Interactive Data Lab.

Here is an example using Vega-Altair to quickly visualize and display a dataset with the native Vega-Lite renderer in the JupyterLab: 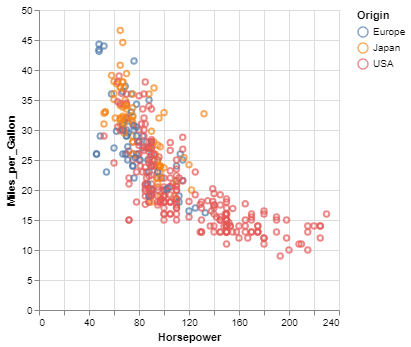 One of the unique features of Vega-Altair, inherited from Vega-Lite, is a declarative grammar of not just visualization, but interaction. With a few modifications to the example above we can create a linked histogram that is filtered based on a selection of the scatter plot.

Getting your Questions Answered

If you have a question that is not addressed in the documentation, there are several ways to ask:

We'll do our best to get your question answered

A Python API for statistical visualizations

The Vega-Altair API contains no actual visualization rendering code but instead emits JSON data structures following the Vega-Lite specification. The resulting Vega-Lite JSON data can be rendered in the following user-interfaces:

To use Vega-Altair for visualization, you need to install two sets of tools

Vega-Altair can be installed with either pip or with conda. For full installation instructions, please see https://altair-viz.github.io/getting_started/installation.html

We maintain a separate Github repository of Jupyter Notebooks that contain an interactive tutorial and examples:

To launch a live notebook server with those notebook using binder or Colab, click on one of the following badges:

Many excellent plotting libraries exist in Python, including the main ones:

Each library does a particular set of things well.

However, such a proliferation of options creates great difficulty for users as they have to wade through all of these APIs to find which of them is the best for the task at hand. None of these libraries are optimized for high-level statistical visualization, so users have to assemble their own using a mishmash of APIs. For individuals just learning data science, this forces them to focus on learning APIs rather than exploring their data.

Another challenge is current plotting APIs require the user to write code, even for incidental details of a visualization. This results in an unfortunate and unnecessary cognitive burden as the visualization type (histogram, scatterplot, etc.) can often be inferred using basic information such as the columns of interest and the data types of those columns.

For example, if you are interested in the visualization of two numerical columns, a scatterplot is almost certainly a good starting point. If you add a categorical column to that, you probably want to encode that column using colors or facets. If inferring the visualization proves difficult at times, a simple user interface can construct a visualization without any coding. Tableau and the Interactive Data Lab's Polestar and Voyager are excellent examples of such UIs.

This approach enables users to perform exploratory visualizations with a much simpler API initially, pick an appropriate renderer for their usage case, and then leverage the full capabilities of that renderer for more advanced plot customization.

We realize that a declarative API will necessarily be limited compared to the full programmatic APIs of Matplotlib, Bokeh, etc. That is a deliberate design choice we feel is needed to simplify the user experience of exploratory visualization.

If you do not wish to clone the repository, you can install using:

(you can omit the --pyargs flag if you are running the tests from a source checkout).